While Henry Hamilton-Smythe minor (8) was playing croquet with
Cynthia Jane De Blaise-William (9), sweet-smiling Cynthia raised
her mallet high and gracefully removed Henry’s head. Two weeks
later, in Henry’s nursery, she discovered his treasured musical
box. Eagerly she opened it and as “Old King Cole” began to play,
a small spirit- figure appeared. Henry had returned – but not for
long, for as he stood in the room his body began ageing rapidly,
leaving a child’s mind inside. A lifetime’s desires surged through
him. Unfortunately the attempt to persuade Cynthia Jane to fulfill
his romantic desire led his nurse to the nursery to investigate the
noise. Instinctively Nanny hurled the musical box at the bearded
child, destroying both.


Play me Old King Cole
That I may join with you,
All your hearts now seem so far from me
It hardly seems to matter now.

And the nurse will tell you lies
Of a kingdom beyond the skies.
But I am lost within this half-world,
It hardly seems to matter now.

But the clock, tick-tock,
On the mantlepiece –
And I want, and I feel, and I know, and I touch,
Her warmth…


Sunday at six when they close both the gates
a widowed pair,
still sitting there,
Wonder if they’re late for church
and it’s cold, so they fasten their coats
and cross the grass, they’re always last.

Passing by the padlocked swings,
the roundabout still turning,
ahead they see a small girl
on her way home with a pram.

Inside the archway,
the priest greets them with a courteous nod.
He’s close to God.
Looking back at days of four instead of two.
Years seem so few (four instead of two).
Heads bent in prayer
for friends not there.

Leaving twopence on the plate,
they hurry down the path and through the gate
and wait to board the bus
that ambles down the street.

3 : The Return Of The Giant Hogweed


Turn and run!
Nothing can stop them,
Around every river and canal their power is growing.
Stamp them out!
We must destroy them,
They infiltrate each city with their thick dark warning odour.

They are invincible,
They seem immune to all our herbicidal battering.

Long ago in the Russian hills,
A Victorian explorer found the regal Hogweed by a marsh,
He captured it and brought it home.
Botanical creature stirs, seeking revenge.
Royal beast did not forget.
He came home to London,
And made a present of the Hogweed to the Royal Gardens at Kew.

Waste no time!
They are approaching.
Hurry now, we must protect ourselves and find some shelter
Strike by night!
They are defenceless.
They all need the sun to photosensitize their venom.

Fashionable country gentlemen had some cultivated wild gardens,
In which they innocently planted the Giant Hogweed throughout the land.
Botanical creature stirs, seeking revenge.
Royal beast did not forget.
Soon they escaped, spreading their seed,
Preparing for an onslaught, threatening the human race.


The Dance Of The Giant Hogweed


Mighty Hogweed is avenged.
Human bodies soon will know our anger.
Kill them with your Hogweed hairs
HERACLEUM MANTEGAZZIANI

I heard the old man tell his tale:

Tinker, alone within a storm,
And losing hope he clears the leaves beneath a tree,
Seven stones
Lay on the ground.
Within the seventh house a friend was found.
And the changes of no consequence will pick up the reins from nowhere.

Sailors, in peril on the sea,
Amongst the waves a rock looms nearer, and not yet seen.
They see a gull
Flying by.
The Captain turns the boat and he asks not why.
And the changes of no consequence will pick up the reins from nowhere.
Nowhere.

Despair that tires the world brings the old man laughter.
The laughter of the world only grieves him,
believe him,
The old man’s guide is chance.

I heard the old man tell his tale:

Farmer, who knows not when to sow,
Consults the old man clutching money in his hand.
And with a shrug,
The old man smiled,
Took the money, left the farmer wild.
And the changes of no consequence will pick up the reins from nowhere.
Nowhere.

Despair that tires the world brings the old man laughter.
The laughter of the world only grieves him,
believe him,
The old man’s guide is chance.

A well-known Bognor restaurant-owner disappeared
early this morning.
Last seen in a mouse-brown overcoat,
suitably camouflaged,
they saw him catch a train.

“More than we’ve ever seen.
– had to tighten up security”

“Man of suspicion, you can’t last long, the British Public
is on our side”

If I was many miles from here,
I’d be sailing in an open boat on the sea
Instead I’m on this window ledge,
With the whole world below
Up at the window
Look at the window…

Plod’s Chorus:
“We can help you”

Mr. Plod:
“We’re all your friends, if you come on down
and talk to us son”


Harold:
You must be joking
Take a running jump

The crowd was getting stronger and our Harold
getting weaker;
Forwards, backwards, swaying side to side
Fearing the very worst
They called his mother to the sight
Upon the ledge beside him
His mother made a last request.

Plod’s Chorus:
“We can help you”

Mr. Plod:
“We’re all your friends, if you come on down
and talk to us Harry”


Harold:
You must be joking.
Take a running jump……


Came the night a mist dissolved the trees
And in the broken light colours fly, fading by.
Pale and cold as figures fill the glade
Grey is the web they spin, on and on, and on and on.
Through the flame still summer lingers on
Though her pictures soon shatter.

All, always the same.
But there appears in the shades of dawning,
Though your eyes are dim,
All of the pieces in the sky.

There was once a harvest in this land.
Reap from the turquoise sky, harlequin, harlequin,
Dancing round, three children fill the glade,
Theirs was the laughter in the winding stream, and in between.
Close your door, the picture fades again
From the flames in the firelight.

All, always the same,
But there appears in the shades of dawning,
Though your eyes are dim,
All of the pieces in the sky.

All, all is not lost,
And light appears in the shades of dawning
When your eyes can see
Order the pieces, put them back, put them back.

7 : The Foutain Of Salmacis


Hermaphrodite: a flower containing both male and female organs;
a person or animal of both sexes.

The child Hermaphroditus was the son of Hermes and Aphrodite,
the result of a secret love affair. For this reason he was
entrusted to the nymphs of the isolated Mount Ida, who allowed
him to grow up as a wild creature of the woods. After his
encounter with the water-nymph Salmacis, he laid a curse upon
the water. According to fable, all persons who bathed in the
water became hermaphrodites.


From a dense forest of tall dark pinewood,
Mount Ida rises like an island.
Within a hidden cave, nymphs had kept a child;
Hermaphroditus, son of gods, so afraid of their love.

As the dawn creeps up the sky
The hunter caught sight of a doe.
In desire for conquest,
He found himself within a glade he’d not beheld before.

Hermaphroditus: Narrator:
“Where are you, my father? “Then he could go no farther
Give wisdom to your son” Now lost, the boy was guided by the sun”

And as his strength began to fail
He saw a shimmering lake.
A shadow in the dark green depths
Disturbed the strange tranquility.

As he rushed to quench his thirst,
A fountain spring appeared before him
And as his heated breath brushed through the cool mist,
A liquid voice called, “Son of gods, drink from my spring”.

The water tasted strangely sweet.
Behind him the voice called again.
He turned and saw her, in a cloak of mist alone
And as he gazed, her eyes were filled with the darkness of the lake.

Salmacis: Narrator:
“We shall be one “She wanted them as one
We shall be joined as one” Yet he had no desire to be one”

Hermaphroditus: “Away from me cold-blooded woman
Your thirst is not mine”
Salmacis: “Nothing will cause us to part
Hear me, O Gods”

Unearthly calm descended from the sky
And then their flesh and bones were strangely merged
Forever to be joined as one.

The creature crawled into the lake.
A fading voice was heard:
“And I beg, yes I beg that all who touch this spring
May share my fate”

Both had given everything they had.
A lover’s dream had been fulfilled at last,
Forever still beneath the lake.

3 : The Return Of The Giant Hogweed

7 : The Foutain Of Salmacis 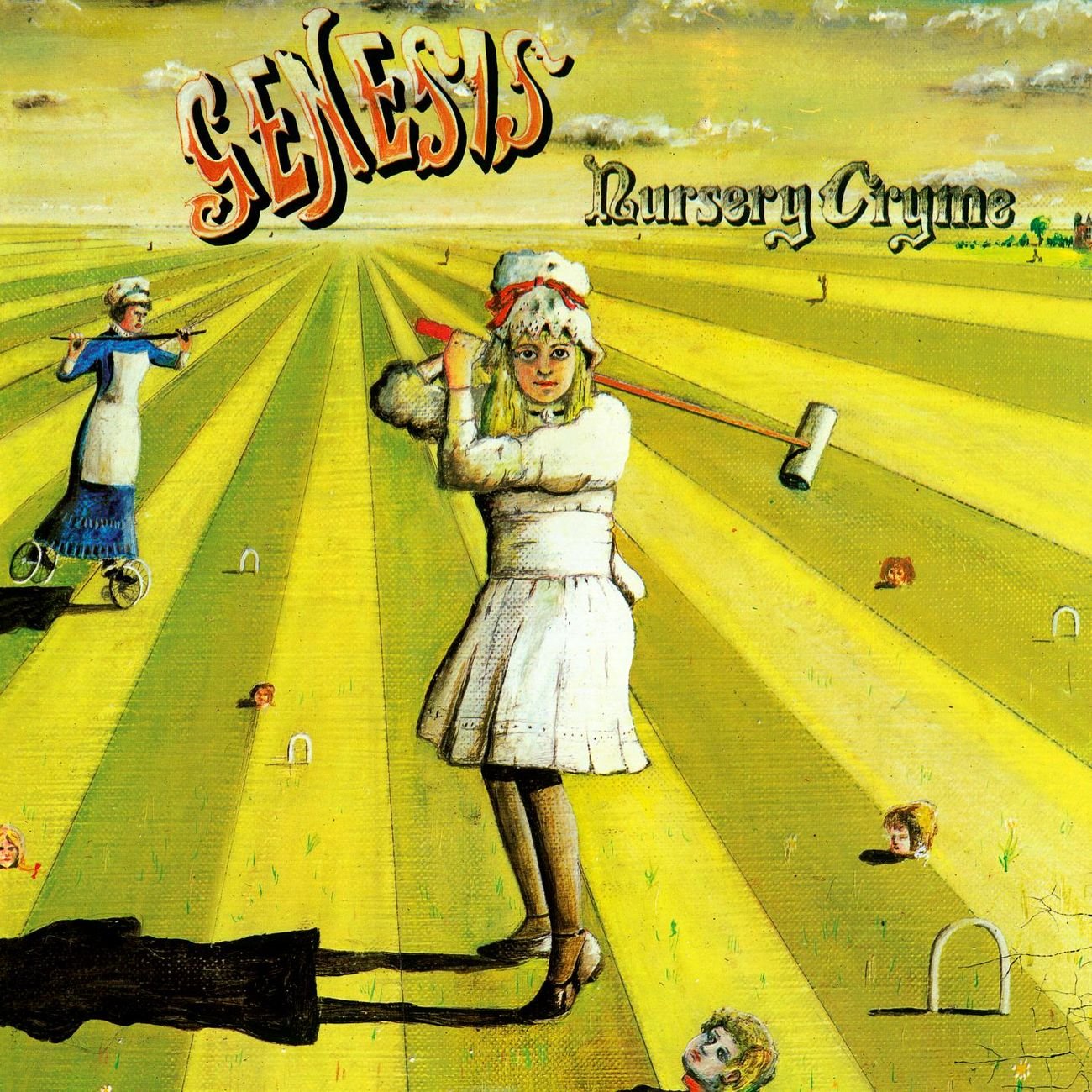